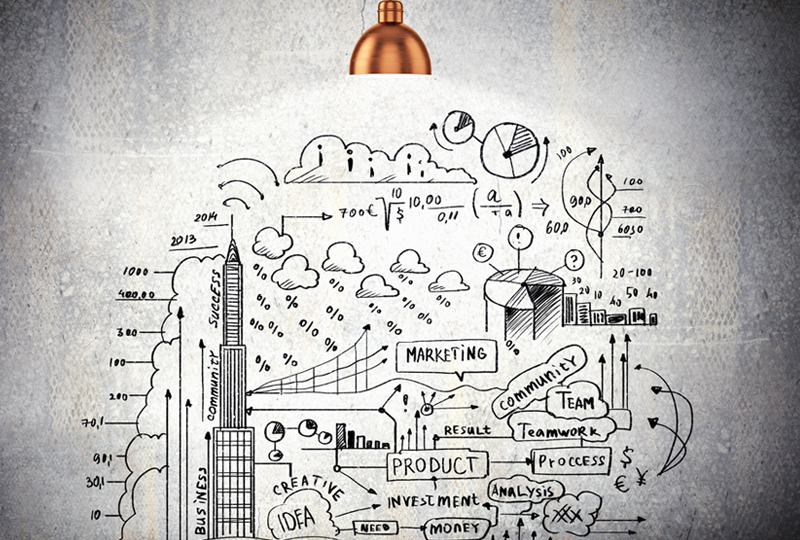 The internet has been hailed as a revolutionary and egalitarian form of information sharing. The information exchange on the internet is neither bound by geography or language nor the socio-economic status of the information provider. Anyone can fire up a computing device and share information without barriers. This begs the question as to how is this possible? What is the underlying technology which makes it possible to exchange information freely and without any technical glitches? The answer to this are open protocols, it were these protocols or rules which empowered the internet to share data packets freely thus making dissemination of information efficient and effective.

The protocols such as hypertext transfer protocol (http) and simple mail transfer protocol (smtp) became the backbone of what we refer to as the world wide web [1] . If it was not for these and many other open protocols there would have been no ‘internet’. But overtime we slowly moved away from open protocols towards what is referred to as platforms. Development of platforms brought a paradigmatic shift to the internet and has led to creation of ‘walled gardens’ where the platform controls information exchange rather than open fields of old internet. This problem of creating walled gardens has been most acute in the e-commerce space, where platform monopolies have become a problem not only for technologists but also for economists and policy makers [2] .

It is in this background that technologists across the globe have gone back to the first principles of the internet in search for a feasible solution to make the e-commerce space more accessible to all. Among such experiments one is the Beckn Protocol [3] which has been incubated in the free and open source space and intends to provide open protocols and APIs for e-commerce activities. This article takes Beckn Protocol as a case study to understand the ongoing technological interventions into re-modelling the internet and taking it back to where it started – as democratic form of information sharing.

Protocols – rules of the game

For any form of information sharing common set of rules are necessary, it is the role of protocols to help in this. Protocols are software codes which implement the rules of communication. Through usage of protocols any form of communication becomes standardised and helps in transmission of information [4]. Communication protocols have several functions which can easily be divided into three major categories first, formulating data packets, second, transmission of data packets, and third, error handling.

Under formulation of data packets, the communication protocols break up a message into multiple data packets, sequence the packets in correct order, and synchronise the information exchange. During transmission of the data packets, the protocol defines the start and end of a message, routes the data packets to their respective destinations, encapsulates and decapsulates the message through correct format conversion. The last major part of this process is error handling under which a communication protocol detects error and corrects it while at the same before terminating a session.

Beckn Protocol also called Beckn is an open protocol which helps in discovery of local commerce through location aware services. The protocol goes on to define a set of technical standards which can be utilised by industries within a market or a region to develop interoperable systems. Beckn primarily provides technical specifications focused on e-commerce and includes discovery, ordering, and fulfilment of services between the consumer and service providers [3]. The protocol also allows for payment to be included as part of its bouquet of specifications. Beckn protocol was designed keeping in mind the core of idea of reducing the cost doing business for individuals and finding a techno-legal solution to the growing concern of platform monopolies.

Beckn delivers its functions through a set of open specifications, these specifications define protocol APIs, it's messaging formats, the network design and reference algorithms. This helps in fostering the growth of an ecosystem of commercial service providers to bring their services and develop a market without being constrained by a specific platform and its regulations. Commercial service providers by using Beckn protocol can create tailor made services which will enhance the user experience and consumer power in the market thus, creating an equal market for both consumers and sellers. The protocol unbinds the demand-side infrastructure from the supply-side provisioning [6], which allows more players to participate in the market. Currently the demand-side infrastructure such as apps and the supply side provisioning services which are the actual sellers are tightly bound together thus, making the sellers dependent on the demand-side infrastructure apps. By de-coupling this Beckn helps in provisioning services to be provided through any form of online consumer interface.

The design principles of Beckn adhere to the core ideals of open protocols make it open, interoperable, allows redundancy, and follows end-to-end principles thus, cutting the role of a centralised intelligence to control actions of users.

The Beckn ecosystem architecture is layered which allows for ease in use and openness. The architecture consists of five layers which are [6]:

Below is the diagrammatic representation of the layers discussed above. 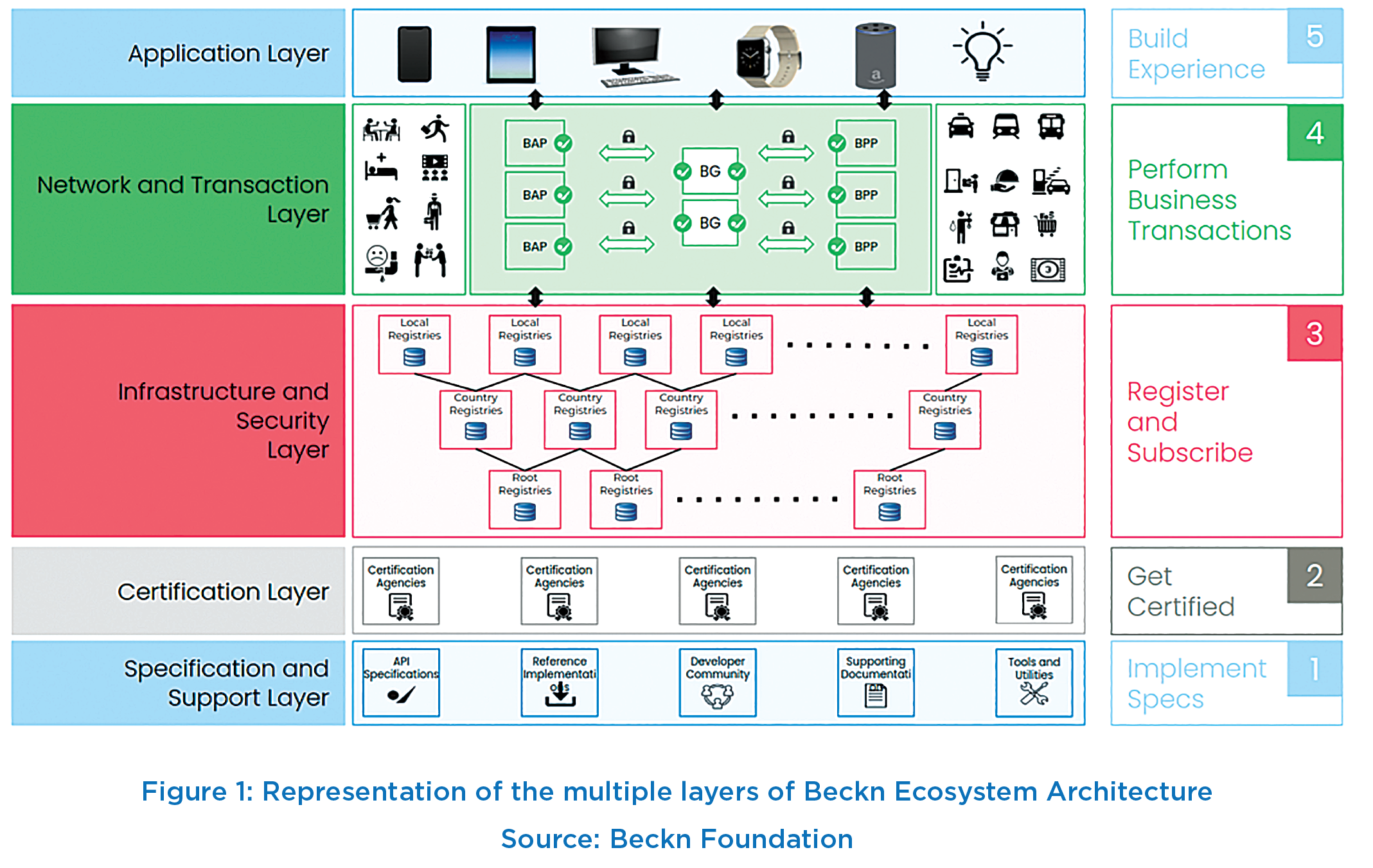 Beckn protocol follows the standard request response cycle similar to HTTP for its interaction between the demand-side infrastructure and supply-side provisioning services. 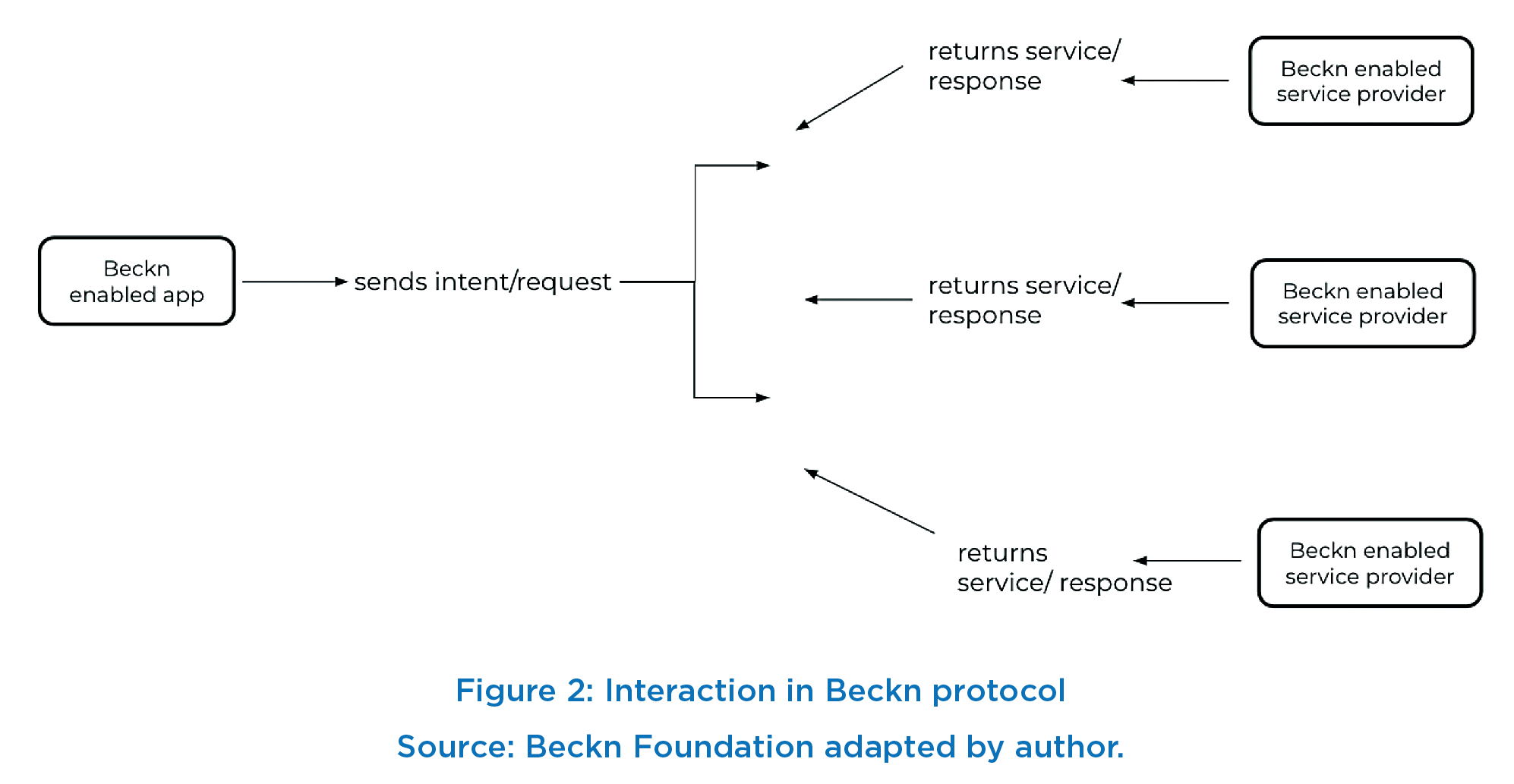 A Beckn enabled app creates intent messages based on user requirements and then routes it to the relevant Beckn enabled service provider, which replies with service messages. Both the intent as well as service messages are standardised helping easy request and response cycle. The messages while being standardised can be modified based on the market or sector of economy they need to operate in. The building block for these messages are the Beckn APIs, followed by the Beckn Core Schema, and on top of which sits sector specific schema for the messages.

Furthermore, by keeping the protocol and all its component in the open-source Beckn intend to harness the power of community participation to create schemas for varied sectors of the economy to benefit from the protocol while at the same time allowing for easy discovery and mitigation of any form of vulnerabilities and problems with the protocol.

One of the biggest regulatory challenges of modern state is the rise and rise of technology platforms. The platforms through aggregation of information have become so powerful that countries across the globe are scrambling for controlling their power. The aggregation of information leads to market monopolies which skew the competition and increases the cost of doing business thus hurting the smaller players in any market. Most countries

have tried to regulate these platforms by applying anti-trust competition laws which range from hefty fines to legislations suggesting breaking up these platforms into smaller entities. But what this approach fail to capture is the underlying reason for these monopolies to have been created in the first place. It is the very nature of internet which helps in closed platforms with centralised intelligence to aggregate more and more information for ‘ better delivery’ of services. Without tackling this technological issue no solution can be provided for the rising platform monopolies.

The open protocol approach taken by Beckn provides a technical solution to challenge the platform monopolies. By allowing users and service providers to function through any platform or application, which follows the protocol, Beckn is trying to cut through the walled garden of e-commerce platforms. The protocol breaks down the dual sided transaction system of platforms into numerous uni-sided platforms or apps. This creates an open network connected through the protocol, making the system platform agnostic and allowing users, sellers and buyers to transact through any platform. [7]

Platforms create a scenario in which the seller and buyer can only transact through single window which is the platform thus increasing the cost of business by reducing the market size. On the other hand Beckn protocol through its networked approach creates infinite number of opportunities for the buyer as well as the seller. This not only reduces the cost of doing business due to the increased market size but also makes the system more democratic and open.

Such technological interventions combined with legal and policy framework can help in creating better and more equal markets and counter the Goliaths of platform monopolies through the Davids of technology and policy.

The Beckn protocol offers a new way of looking at markets in the internet era, for a long time e-commerce has been dominated by platforms and the protocol intends to reverse this trend. But while adopting this approach technologists, commercial players, and policy makers need to be wary of the laissez faire approach of early days of platforms. On its part technologies such as Beckn need to mature and develop robust security features to avoid technical and non-technical exploitation. For example the ‘Trust Infra’ layer of Beckn which will provide Digital Certificates from Certification Agencies is going to be one of the most crucial pieces of the protocol as it will help avoid incorrect and illegal activities to be developed over the protocol.

Through combined efforts of technologists, commercial partners, civil society, and policy makers the a more inclusive, open, and egalitarian e-commerce can be achieved. While technology cannot be a panacea for real

world problems but if applied with correct intent and with a robust framework has the ability to alleviate some of those problems. On its part Beckn’s intent and approach is in the right direction what needs is development of a robust framework around the technology to help it achieve it intended goals.