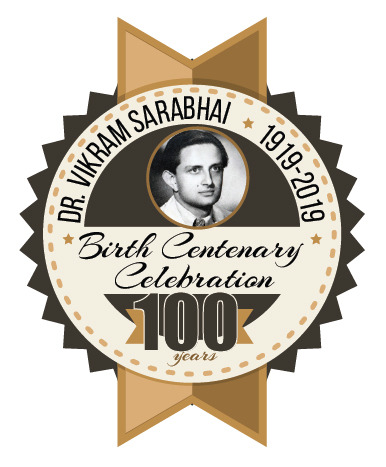 
This year, India celebrates the birth centenary of Dr. Vikram Sarabhai, father of India’s space programme. Dr. Sarabhai was a rare scientist, technocrat who believed in science to provide solutions to the problems faced by a country of the size of India.

Born in 1919 into a family of leading mill owners in Ahmedabad which gave education a premium place in the upbringing of its children, Dr. Sarabhai carved a new path into science. He obtained his degree in Cambridge and did his post-graduation under Dr. C.V. Raman at the Indian Institute of Science. It was Dr. Raman who guided Dr. Sarabhai in picking up research into Cosmic Rays which earned the latter a Ph.D. from Cambridge in 1947.

When Dr. Sarabhai came back to India just after Independence, India was in the throes of nation building. He laid the foundation of Physical Research Laboratory (PRL), starting at his home and later to be housed in M.G. College in Ahmedabad. PRL was to be the cradle of Indian space science. Here Dr. Sarabhai toiled day and night studying Cosmic Rays, and properties of the upper atmosphere. He set up a Cosmic Ray lab in Bangalore and travelled to Srinagar in J&K to study the variations of Cosmic Rays in the upper reaches of the atmosphere.

With encouragement by his close friend, Dr. Homi J. Bhabha, the founder of Bhabha Atomic Research Centre, Dr. Sarabhai ventured beyond PRL into space sciences. The launch of Sputnik by Russia is said to have propelled Dr. Sarabhai’s dream of a space programme for India. He is known to have nurtured the idea of space exploration for more than a decade. Soon, INCOSPAR (Indian Council for Space Research) was set up under the Department of Atomic Energy (DAE) which was later to be known as ISRO (Indian Space Research Organization).

Right from the beginning, Dr. Sarabhai was clear in his mind that Indian space research would not be confined to token research but would dare to venture as far deep into space as human mind can imagine. He had spoken, both in national and international forums, of possibilities of civilian applications of space research especially in communications, agriculture, forestry, geophysics, and many more.

Dr. Sarabhai’s first venture as a public figure was setting up of ATIRA (Ahmedabad Textile Industry’s Research Association) set up where he brought in process control and other scientific methods to production which revolutionized the industry.

Encouraged by Kasturbhai Lalbhai, a prominent businessman from Ahmedabad, he also set up the Ahmedabad Management Association (AMA) to train people in scientific management practices. This venture would later become Indian Institute of Management, Ahmedabad (IIM-A).

Amidst all of this, Dr. Sarabhai continued to take an interest in his family business and brought in the same scientific rigor to managing is own affairs as he did with his science establishments.

His style of managing can be paraphrased by one of his quotes, “There is a no leader and no led, a leader, if one chooses to identify one, has to be a cultivator rather than a manufacturer.” Dr. Sarabhai was awarded the Padma Bhushan in 1966 and with Padma Vibhushan in 1972 posthumously.